First match today against the USA and not Spain as we thought. A big one for the American on our team, my buddy Mr Jim Gorman. I could feel myself welling up when the coach gathered us in a huddle beforehand.

‘We all know what Jim means to us as a player and a person. So let’s make him proud to be playing against his home country in an Irish shirt with us.’

I so wanted to win. And we couldn’t do it for him. Again we might have won. They were well drilled, a couple of brilliant play-makers in the middle. Personally, I thought it was maybe my best game so far, gave my heart and soul. It still wasn’t enough. It was even a greater disappointment than yesterday.

So many discussion afterwards, in little groups, the people you’re close to on the team, the ones you confide in. What are we doing, what do we need to do. 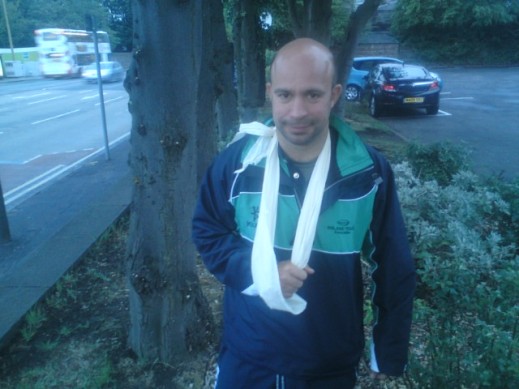 Federico forced to rest out the USA game with a shoulder injury – we knew he’d be back though. He’s tough.

And so the Swiss… we did it. We won. 8-2. Oh yeah! We made some super tries, good team performance, great spirit, great defence, great… stop me any time you like.

Would this be a good time to mention I was actually rested for this game? Myself and Gary the vice-captain got to hold hands and console each other on the sideline… aww. Rest our legs for 3 big games tomorrow.

The upside was that the two of us got to represent Ireland at the opening ceremony. Yes, the Opening Ceremony – 2 days into the competition – I couldn’t figure that one out either. 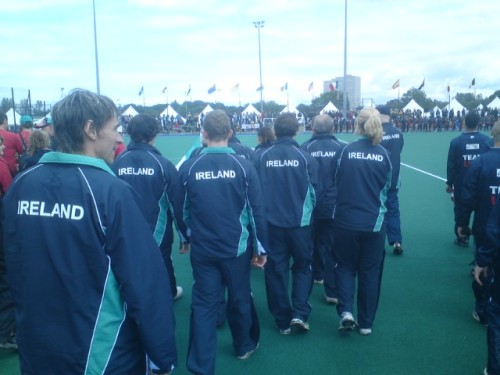 And we were treated to the first public airing of the new Touch Rugby Anthem. I take back everything bad I said about Bon Jovi yesterday. Oh dear!

Playing Touch is lots of fun

It’s a sport where we get to run (a lot)

We can play it with our friends

And we go until the end (of the match)… etc