What runs through your mind as you stand on the pitch before the start of an international game?

I’d decided that my only pre-game thought for today to get me in a proper mindset would ‘This is a final. I love finals.’

I bounced around on my feet, staying loose.

Suddenly, I started thinking of stuff I’d read about how Celtic warriors got ready before going into battle… ‘Huge horns were blown. Men beat their swords against their shields and screamed battle cries and insults at their opponents… The Celts formed an endless field of tall, screaming scary looking creatures…’

So, what did I do pre-battle? I glowered a bit at my opposite number. (I’m sure he was terrified.) And the scene playing in my head was this…

Are we the goodies or the baddies in this particular story? I remember the English rugby team were once described as ‘white orcs on steroids’? Clearly we’re the good guys.

I loved defending in this game. Here is one of favourite quotes, from my teammate Emma from the last Euros about her mindset when she is defending. I thought it was funny and brilliant – ‘We’re Irish. This is our land and you’re never taking one bit of it again.’

Keep them out. They’re not getting in here.

The excruciating annoyance of only drawing this game. We have a couple of grievances to store too so that’s good.

Footage of try by Eoin against England –

Couples on the SMX team…Thumbs up from Dev and Claire 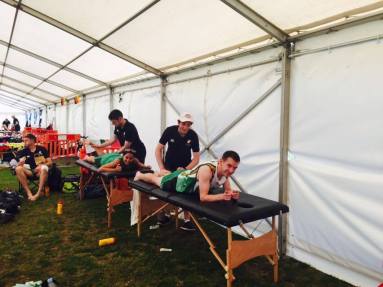 Jim in pain on the physios table..

And Eimear going through pre-selection tests for the Jersey space programme.

Photos of Game vs France from Day 1.

What happens next…? Me about to score a try, don’t you know. 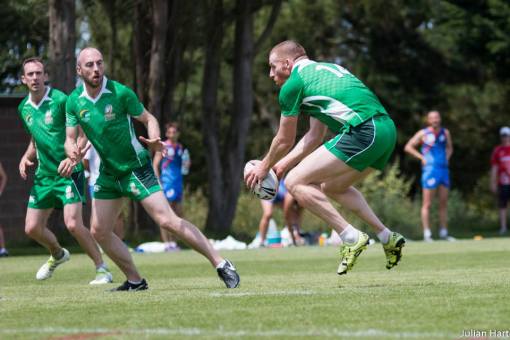 This looks convincing on the scoreline but was a tough one mentally and you could see it in our team. A lot of mistakes, making life hard for ourselves. I don’t care. We stuck at it and we won.

We have France first thing tomorrow and I can’t wait. Another must win game. Beat them and Wales tomorrow and we have a good chance of making the final. Beat England also and we’ll definitely make the final. Don’t and we won’t and won’t deserve to.

Time for a little treat before off to bed.